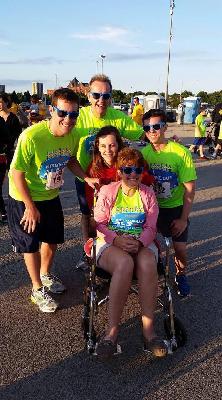 I am running for my mom Julie Fallon, passed away from ALS in January after battling the disease for nearly four years.

Since 2010 the Strike Out ALS 5K, has attracted thousands of Chicago area runners and has raised nearly $500,000 for the Foundation. In 2015, the 5K had more than 700 participants that came together and raised over $60,000! The money we raise together goes toward helping people currently living with ALS (PALS) and their families through the Foundation’s Home and Community Service and grant programs. It also supports the Les Turner ALS Research and Patient Center at Northwestern Medicine where PALS are seen by a multi-disciplinary clinical staff at the Lois Insolia ALS Clinic, ensuring no part of their disease goes unseen and untreated. The Center also supports three full functioning research laboratories, each on providing hope of a future without ALS.

I’m participating in the 2019 Strike Out ALS 5K this year because I believe in the work of the Les Turner ALS Foundation, I believe in providing the best possible care to Chicagoland area ALS patients and their families and I believe that the money we raise together will lead to finding the cure for ALS. Join me as we run towards more than a finish line, we run towards a CURE!