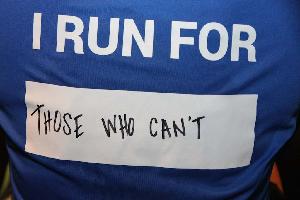 Did you know the lifetime risk of developing ALS is just 1 in 300? There is no known cure for ALS and, once diagnosed, patients typically live only three to five years. These are alarming facts about ALS, but we can help change the course of the disease and ensure that progress is made toward finding life-enhancing treatments and a cure.

The Les Turner ALS Foundation is here to care for those affected by the disease, answer their questions and support them and their loved ones every step of their journey.

I am participating in the Bank of America Chicago Marathon as part of Team Race for ALS because I believe in the mission of the Les Turner ALS Foundation! I believe in providing the best possible care to people living with ALS and their families in the Chicagoland area and I believe that the funds we raise together will lead to a cure for ALS. This cause is important to me and I’d greatly appreciate your support of my efforts.

I haven't had to struggle with this disease personally, but I have had a few connections to it and its sister disease PLS (Primary Lateral Sclerosis). In high school, one of my good friends' girlfriend's father passed away from ALS. We would often spend time as a friend group at her house and I saw the struggle that he went through. His battle inspired me to write my final anatomy and physiology thesis on ALS.

Recently my wife who is a Speech Pathologist has been working with a patient with PLS. One of his bucket list goals was to skydive. My wife, being the incredible person that she is, told him that if he did it she would join in. On June 24th both of them jumped out of a perfectly good airplane. This story has attracted a lot of attention. So much so that at least 7 more people from the hospital jumped! Mitch's mission is "I may have PLS, but PLS doesn't have me!" Here is a bit of his story below:

Anyone else have skydiving on their bucket list? Read below about Mitch's Mission.

When Mitchell Udowitz was diagnosed with PLS, one of the first things he did was start a bucket list. One of the top things he added: skydiving. While some people thought it was a crazy idea, his response was “why not?”. Mitch has a mantra he follows throughout his PLS journey, which is inspired by American television host, Montel Williams. Montel is currently fighting MS, a disease that also affects the central nervous system. Day to day Mitch states “I have PLS, but PLS does not have me.”
Mitch started becoming more serious about getting his skydiving experience off the ground (pun intended). He mentioned the idea to his speech therapist, who at their next appointment, told Mitch that she would like to join him for the jump.
Word got out about Mitch’s jump to the northwest Indiana medical community, and soon enough, 7 more jumpers had been recruited. Most of them were not personal friends of Mitch, just people that had heard his story and were inspired to join the fight. Most of these individuals did not have much knowledge about PLS/ALS before hearing Mitch’s story. Once word got out at the local level, Mitch's friends and Mitch's speech therapist had ground support up to near 60 people for the event. Mitch’s goal is to continue to grow this event to help raise important awareness for the PLS/ALS cause.
The skydive will be taking place on Friday, June 24th at 9am CST. Mitch chose to take his jump at Skydive Windy City Chicago in Michigan City, IN. He chose this location because he has seen the beautiful city of Chicago by car, foot, etc but this experience will give him a whole new and different view of the city. After the jump concludes, the jumpers and spectators will be joining together for a group dinner.

Please consider making a donation to help me reach my fundraising goal. My wife Jai and I need to raise $3500 combined for the foundation. Together, we can make an impact and create a world free of ALS.