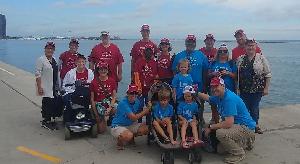 Our Team: Red's Raiders & Chris's Convoy is participating live this year (though you can also participate virtually) in the 2021 ALS Walk for Life because we believe in the work of the Les Turner ALS Foundation, we believe in providing the best possible care to Chicagoland area ALS patients and their families and we believe that the money we raise together will together will lead to finding the cure for ALS.

We're walking in memory of Lynne DiVenere and her sister,  Christine Jasch.   The team was formed 10 years ago after Chris was diagnosed, and we lost her in 2015.  Lynne was diagnosed a few years later, and just recently passed away on March 12th.  She is greatly missed by her family, friends, and co-workers.  Lynne's beautiful spirit is reflected in her tight close knit family, friends, and of course, her beautiful gardens.   Les Turner staff was right there w/both Chris and Lynne throughout their journey with ALS.  Please join Lynne and Chris's mission to raise funds for research and support for persons w/ALS.

The ALS Walk for Life is one of the world's largest gatherings of ALS patients, families and friends. Now in its 16th year, the Walk has raised over $12 million in support of Chicago's independent leader in ALS, the Les Turner ALS Foundation.

The money raised through the Walk helps people currently living with ALS (PALS) and their families through the Foundation’s Home and Community Service and grant programs. It also supports the Les Turner ALS Research and Patient Center at Northwestern Medicine where PALS are seen by a multi-disciplinary clinical staff at the Lois Insolia ALS Clinic, ensuring no part of their disease goes unseen and untreated. The Center also supports three full functioning research laboratories, each one providing hope of a future without ALS.