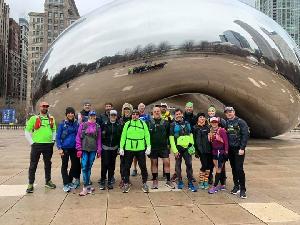 In 2013, ultramarathoner Alfredo Perro complained to his friend Scott Kummer that he wanted to run one last 100-mile race before the end of the year. They decided to simply run from the "Bean" in Millennium Park in Chicago to the City of Milwaukee for a roughly 100-mile Turkey Trot on Black Friday. They called it the “World’s Longest Turkey Trot.” Shortly thereafter, Alfredo was diagnosed with ALS. Alfredo fought a battle with the disease but lost his life to it in November 2015. Every year a few runners have carried on this tradition in his honor by running from the "Bean" in Chicago to the Milwaukee Amtrak Station.


From November 26-28, the runners will run as many miles as possible while raising awareness and money for ALS.
Help us reach our goal of $10,000!
View More
You can sign up here!
Follow us on Facebook!
View More
Donate Now
Team Roster
Raised